This is going to be a blog post about electric vehicles. But more than anything, it’s a post that stems from the world of energy and the world of cars. Admittedly, both are complex worlds and anyone who works in the field of sustainability will acknowledge that both worlds are quite mired in their beliefs of what is good for them. The world of cars for example, has successfully deceived the entire planet for a good 100 years in saying that internal combustion engine (ICE) cars are the best way for transport and personal mobility. The world of energy convinced the planet for a long time that fossil-fuel based sources are the best way to power our gadgets, our cities and our lives.

The Worlds of Energy and Cars

If we move on to the transport sector, it is the one pulling a large chunk of the global energy flow too. Transport covers planes, trains, ships, trucks and cars and almost all of this transport runs on petroleum. Cars contribute more to carbon emissions than the others combined and keeping in mind the rapidly burgeoning aspirations and the rapidly increasing numbers of cars on Indian roads, it makes sense to look at petrol-run cars in transport. Basically, car transportation is also quite dirty.

In addition, most cars on Indian roads today are ICE cars. ICE cars are where tiny explosions occur in cylinders that push pistons back and forth that force connected metal bars to turn wheels, hence propelling something forward i.e. Your car moves. This very unflattering description is what happens in every four-stroke engine, be it in a Maruti Alto or a Mercedes CLA Class. And this is what has been happening in transport since 1815, since the steam locomotive engine was invented. It is a little frustrating and strange that this particular bit of old-fashioned technology has continued for 200 years with little change in how a car runs. Sure there have been incremental changes in the outside chassis of a car, or in safety standards or in mileage or fuel consumption, but essentially what powers the car has remained the same.

Funnily enough, when petrol powered cars were invented at the turn of the 20th century, electric motor-run cars were already in existence and were considered ideal. As they rightly should have been, since they were quiet, clean and took advantage of cutting edge technology. Some key breakthroughs happened first in petrol cars but in the 100+years since, surely technology has progressed enough to look at electric vehicles. 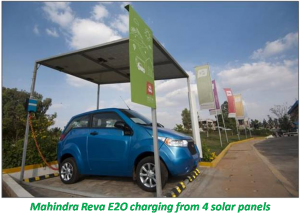 Why electric vehicles (EVs) are an interesting intersect between cars and energy is because EVs are actually in that non-enviable position of being able to threaten the status quo in both the worlds. EVs can completely eliminate the emissions from cars, efficiently use electricity and form a major demand shift to renewable sources of energy. Let’s see the technology and the enabling ecosystem that can allow this to happen. EVs run on AC induction motors by using electricity to generate a rotating magnetic field which causes a rotor to spin, hence turning the wheels on a car. EVs run on batteries and the arguments against these have always been centred on weight of battery packs, EVs low driving range etc. Interestingly though, electric motors are far more convenient to run than an internal combustion engine and it actually costs a lot less to power an electric motor than an ICE. More so, large scale renewable energy plants can supply power directly to these battery operated electric motors. These electric cars can even play the role of storage devices for excess electricity from renewable energy plants.

Scaling Up of EVs

In recent years, electric mobility started occupying some mind space in India and being looked at a feasible transport option. Four main things need to happen in order for EVs to be scaled:

Points 1 and 2 centred on the car’s technical performance have in fact been resolved by a pioneering American company called Tesla. They came out with Tesla Model S, the fastest 4-door Sedan in history which was priced decently and had a bunch of really great engineering innovations and technical specifications that got the entire automobile industry in a tizzy. So much so that big car companies took notice and soon thereafter, the market was flooded with EVs. Nissan launched the all-electric Leaf, GM launched a plug-in electric Chevy Volt and BMW came out with the i3. There goes point 3.

That initial jolt got the rest of the automobile industry going and with fast technical advancements, one can see the feasibility of electric vehicles becoming a reality. While the technical specifications will take up another blog post altogether, it is evident that the technology surrounding an electric vehicle isn’t the only problem. What about the price? In the US, UK and EU, governments offer a tax credit for buying an EV of sufficient range. The Norweigan government provides zero import duty on EVs, assistance for charging infrastructure and permission for EVs to use the bus lane during rush traffic. But neither you nor I live in these fancy countries, so what do we care? We care because the feasibility of EVs as a transport option hasn’t escaped the attention of the Indian government either. Enter point 4 of our scale up strategy.

In 2013, the Government of India launched the National Electric Mobility Mission Plan (NEMMP) 2020. The NEMMP aims to achieve fuel security by promoting hybrid and electric vehicles in the country and has an ambitious target of achieving 6-7 million sales/year by 2020 and on. The Mission aims to provide fiscal and monetary incentives to kick start the scaling of this technology in India.

In the union budget 2015-16, a scheme called Faster Adoption and Manufacturing of (Hybrid and) Electric Vehicles was launched with an initial allocated outlay of Rs. 75 crores. The scheme is supposed to provide a major push for early adoption and market creation for electric vehicles in the country. Already by 2014, 20,000 EVs had been sold.

That means, incentives to customers, manufacturers and R&D organisations. You might remember the Mahindra Reva that announced a 2nd generation electric car E2O which was launched soon after this Mission was announced. Mahindra has a spanking new 35,000-capacity-per-year plant in Bangalore and the company felt that for the first time government policy was reflecting changing times. As a customer, the infrastructure for charging of your car would be set up either at home or in your office, you would get a subsidy for that. In fact, if you chose to charge your car at a BSES office, it would be for free. The fuel consumption cost of an electric car would effectively be zero. 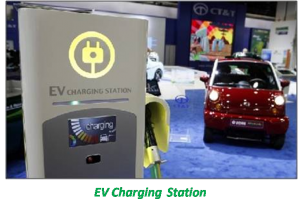 Hard core autophiles would be quite miffed with the inclusion of a Mahindra Reva E2O and a Tesla Model S in the same article. However, the point being made here is the fact that one can see a shift in the changing ecosystem surrounding EVs. From the customer end it is purely about a better driving experience and lower costs of not just buying the car but maintaining it too. From the government’s end, it is about fuel security. At the Ministry of Heavy Industries (who came out with the EV vision 2020), the concern is around rising oil imports and increasing urban pollution. Currently India imports about $180 billion worth of crude oil and this number is increasing depending on GDP and number of cars. Combine this with the fact that India is looking to install up to 175 GW of renewable energy, there might be an answer here for both fuel security and decreasing urban pollution. While battery prices are a factor for Indian consumers, India can leapfrog to EVs the way it leapfrogged wire lines and went straight to mobile telephony.

Do these baby steps mean the battle is won? Hardly. There are miles to go (drive) before we sleep. Manufacturers need make more of an effort to convince the Indian customer, the Indian customer needs to strive for a better car and in all this, the government needs to give bigger and better incentives. But baby steps are how a journey of a 1000 miles begins and the journey has begun. Hold on for a wild ride!