Physically weary but mentally invigorated, eight TARAgram Yatris sit in a quiet corner at the Patna Airport. These eight Yatris wore several hats over the last two days: of cross country marathoners traversing 400 kms across Bihar, of accountants trying to understand the economics of a decentralised renewable energy model, of social practitioners trying to understand how these models impact the social fabric of rural areas, of environmentalists understanding the reduction in carbon emissions. It has been a long day and still at 8:30pm at night, these eight Yatris are discussing the models they saw on the field. 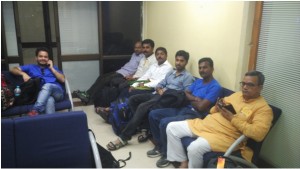 TARAgram Yatra 2015’s sub theme of “Energy Driving Low-Carbon Local Economies” took these eight participants along with three organisers to four sites in rural Bihar. Situated in Gopalganj and Saran clusters, about 200 kms from Patna, these four sites have small scale off-grid solar power plants set up. These off-grid solar power plants distribute electricity to nearby villages and markets through a micro-grid network of about two-three kilometres. Characterised by little to no access to energy these villages are serviced by small scale decentralised off-grid solar plants that aim to provide electricity access for both household lighting and productive loads. The field visit was structured such that the participants were divided into two groups which went to different sites to observe and collect information. One group went to the Saran cluster and visited Bheldi, Fakirtoli and Koreyan villages. The other group went to the Gopalganj cluster and visited the villages of Dumarsan and Nabiganj. 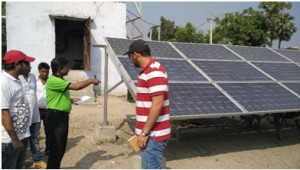 Yatris being shown the solar plant at work

The Yatris were quite interested in knowing about the technology involved in making a solar plant work. The first visit in both villages was to the solar power plant to showcase the entire technology ecosystem. At the generation end, the solar panels, inverters and batteries were shown to the participants. The interactions between these components were explained further and questions came from the Yatris on the sourcing, operations and maintenance of the plant. At the distribution end, the cables, distribution box and DA’s innovation of the load limiter were explained. The load limiter is a device which sets the upper limit of the power – the load – that a particular connection can draw from the plant. It is a cost effective device that has helped tremendously in managing the loads from the plant.

The Yatris spoke to several enterprises that have been connected to the solar power plants. Some of these were functional before the access to electricity was provided and the electricity has given a value addition to their existing work .For example, a shop owner in Fakirtoli who bought a deep freezer to help sell cold milk products, soft drinks and store his sweets for longer period of time. Some enterprises have cropped up solely as a consequence of the reliable supply of electricity. For example, a computer-based certified training centre in Dumarsan, gives 6-month long training courses on Tally, computer applications, Microsoft office etc. Students from villages around Dumarsan attend the centre to get certified courses. A direct benefit of skill-building and capacity building was evident here. 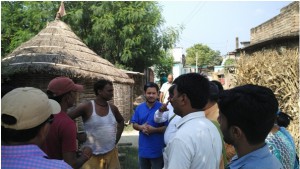 Yatris interacting with the households

Interactions with the households were also good in understanding the impact of a light bulb and a mobile charging point. Several households were visited – the ones who were connected and even a few which weren’t – to get a holistic view of the solar model. The households that were connected were satisfied and identified children’s studies and reading as the primary motivation for subscribing to the connection. One young lady also mentioned that the night lighting has actually helped the social fabric of her hamlet since small children from different households now stay out later and play amongst themselves.The households not connected were either because of the grid supplying them little electricity than what they required, or because they felt the initial registration charges were very high.

Telecom Tower Perspective: The model is such that a major demand chunk comes from the telecom tower operators. About 40% of the total generation is for telecom towers. These telecom towers are ubiquitous in rural areas, run 24×7 and are huge energy sinks. They used to run on diesel power but a few of them are connected to this solar plant and the Yatris had an opportunity to speak to the owner of one such telecom tower. While interacting with him, it was found that compared to diesel, this supply is far more reliable and cheaper. He saved 33% of what he used to spend previously, but more than that, he stated that he has the peace of mind knowing that he is assured reliable supply.As far as the plant is concerned, having an assured load from the telecom tower gives an assured demand for the plant to function.

Learnings from the Field: Overall, the solar plant generation and distribution is being viewed in a positive light by all three loads: telecom tower, micro-enterprises and households. Some major discussion points that emerged from the field were as follows: 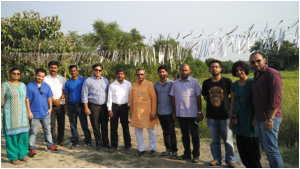 From various backgrounds of CSOs, academia, corporates and grassroots practitioners and the various substantive areas of energy, enterprise development, micro-finance, rural development, economics, political thought etc. the Yatris composed of a diverse set of individuals who were on a quest to understand a system of renewable energy. That understanding has happened through the field visit and these Yatris now look forward to the roundtable conference to figure out tangible ways to contextualise and replicate such models in other parts of the country.