Indian economy, over the last one year, has witnessed announcement and execution of various schemes that has resulted in distortions in the economy, the most recent one being demonetisation. Various government schemes and programmes announced by the government including like Renewable energy, Smart City programme, Skill India Mission, Make in India and ‘more from less’ in agriculture, Jan Dhan Scheme highlight the primary focus areas of the Indian economy in the short run.

This blog studies sectors of the Indian economy and assesses them on development indicators. The hypothesis is that any economic activity, or any creation of value (as calculated by GDP, GCF) has a dual objective:

To improve Lives of the People: Any product or service provided by an economic activity provides higher utility and well-being of the people consuming the product or service. Basic utility services like food, housing, shelter, education, health, in principle is considered to be the primary responsibility of the economy in any region/country. Additionally, as an economic activity is the source of income and thus livelihood in a society, adequate number of decent jobs for its population seeking employment is another important indicator for a prosperous economy. 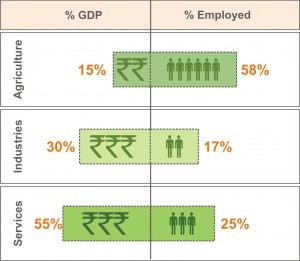 Percentage of GDP and employment through Economic Sectors in India

The concern is that high growth rate in India has had little impact on job generation. The government data shows that while gross domestic product grew at one of the fastest paces in the world over the last two years, employment creation was the slowest on record in 2015, with just 135,000 new jobs in the formal sector of the economy against an estimated 12 million new entrants to the workforce. Labor Bureau data shows new jobs in key eight labour-intensive sectors — textiles, leather, metal, automobiles, gems and jewellery, transport, information technology and hand loom fell to a six-year low of 135,000 in 2015 as against 421,000 jobs in 2014 (Economic Times, 2017). The Indian population has a long way to go to achieve basic living standards. India stands low on rank 135 among 187 countries on the Human Development Index with 58% of the population lacking means to meet essential needs.  (Donnan, 2014)

To keep our Ecological Footprint within the Bio-Capacity: Like any other natural system, India has its own bio-capacity, that is the air, water and land systems take a certain amount of time to regenerate and be available in the same quality and quantity. This expects our economy to utilise our natural systems at a speed equal or lesser than the regenerative speed of the natural systems. Else, we will face shortage of water, degraded land systems and poor air quality that makes it difficult for a decent living for all.

Our environment has been exploited massively in the last few decades. According to the Global Footprint Network in 2012, India’s ecological footprint exceeded its bio-capacity by 160%. With 70% of the surface water polluted, 60% of the ground water sources expected to be in a critical state by next decade; the impending water crisis is at India’s door steps (Asia Development Bank Institute, 2012).

Agriculture: For India to ensure its economic growth leads to better people and planetary outcomes, it cannot choose to ignore agriculture. The agricultural sector accounts for 70% of the total global freshwater withdrawals, making it the largest user of water and consumes about 30% of the total energy consumed globally (FAO 2011).

Despite income inequalities between agriculture and other sectors, the shift of labour from agriculture to other sectors is less likely in the near future because jobs creation outside of the agriculture sector has not matched India’s levels of economic growth.[i] A study by CRISIL indicates that insufficient employment creation in the Industry and Services will result in more workers being locked in to the agricultural sector, the least productive sector with the lowest-wages.

Agriculture policies will have to create more economic value across the value chain owned and controlled by farmers, especially the 85% of the small farmers in India. Farmer Producer Organisations that lower the costs of production and ensure higher returns due to economies of scale, value addition and market reach will become a critical enabler in this sector.

Industries, Corporates and Infrastructure Performance: Manufacturing currently contributes just over 15% to the national GDP. The aim of one of the flagship programmes – Make in India is to grow this to a 25% contribution as seen with other developing nations of Asia. In the process, the government expects to generate jobs, attract foreign direct investment and transform India into a manufacturing hub preferred around the globe. While manufacturing sector is seen as a potential job creator, some of the caveats with the sector are:

Technology Choices within a manufacturing sector must ensure inclusiveness and greenness of the sector. A mechanised cement industry is highly efficient and an economic boon but is not creating enough jobs with respect to the economic value generated.

Scale of Production determines the number of local decent jobs created and the environmental sustainability of production. Manufacturing sector industries, especially the ones that do not require very high fixed capital costs have greater livelihood benefits over large mechanised forms of production.

Nature of Production/Service determines the market it caters to Indian economy has fallen into the loop of creating newer products and services for the urban middle class market and exploring opportunities of business. There is a lack of make in India innovations to cater to the basic need business solutions required for the poor and the marginalised.

Services Sector: India’s employment scenario has experienced a pendulum-like shift, from an agricultural towards a service-rich economy, corroborated with a boom in employment for sectors like IT, insurance, finance, infrastructure, retail and telecom.

With services contributing to 66.1% gross value-added growth in FY15-16 based on data from an India Brand Equity Foundation report, it is clear that burgeoning progress is firmly entrenched in the waves of the services sector. The trailblazing effect of rapid technology adoption is substantiated through a Korn Ferry Survey predicting that 44% global business leaders believe that people will be replaced by automation in the future. With data from the National Sample Survey Office and the Census 2011 revealing that nearly 105 million fresh entrants are expected to enter the market, a treasure of burgeoning talent under the age of 25 exists in the country – waiting to be nurtured to meet the long-term demands of industries over the next few decades (Financial Express, 2017).

Indian economy will have to certainly decide on the degree of technology upgradation and the choice of technologies that are suitable given the demographic conditions of the country. Alternatively, it should also look at fiscal or monetary tools such that benefits of technologies reaches people equivalently, an approach that has not yet gained enough evidence in the current market based open economy  (Financial Express, 2017).

With the intention to deliberate on germane issues of development with the mission of inspiring sustainability in policy and practice,  Development Alternatives Group is organising the annual event TARAgram Yatra (TGY). TARAgram Yatra 2017 will witness experts, policy makers, entrepreneurs, development practitioners, businesses and community based organisations coming together to reflect on the principles and approaches for transitioning India towards a more green and inclusive economy.  Click here  for more details.

[i] CRISIL (2014) ‘Slowdown to re-direct 12 million to farms’, CRISIL, http://www.crisil.com/Ratings/Brochureware/News/CRISIL_Research_PR_Employment_07Jan2014.pdf?cn=null