NITI Aayog has recently drawn an exhaustive plan for achieving the target of doubling farmers’ income by 2022-23 through a seven-point strategy. The government proclaims to give emphasis on raising farmers’ income rather than increasing the agriculture output (Press Trust of India, 2017). The contribution of agriculture to GDP was only 17 per cent, while 45 per cent of the population was engaged in agriculture (Ministry of Statistics and Programme Implementation, 2017). The contribution has to be increased to 45 per cent for which skill development programmes have been started to provide training and employment to people near their homes, according to Ramesh Chand, Member, NITI Aayog (Press Trust of India, 2017). 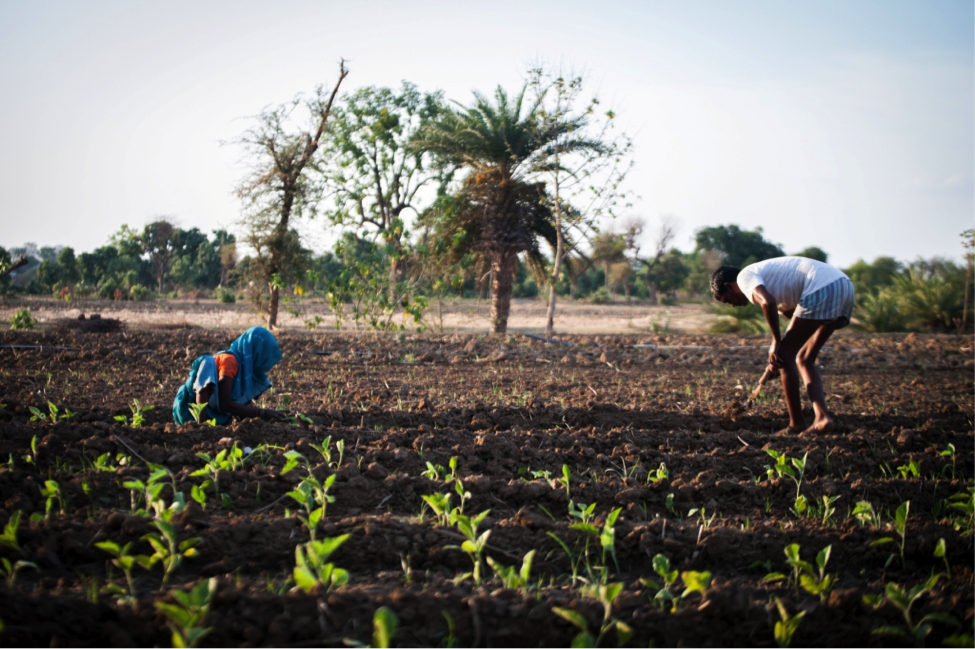 While the government is continuously announcing initiatives (digital wallet, smart phone apps, crop insurance, soil health card), waivers for farmers, and there are debates over target definitions and setting; the cases of farmers’ agitations across the country continue to be reported in high number. Farmers from Madhya Pradesh and Maharashtra recently protested when they found no buyers for their bumper crop. Declining output value is identified as the root of a farmer’s sorrow. Between 2011-12 and 2015-16, the total value of cereals and pulses produced in the country went down by 3%, for oil seeds by over 13% and sugar by 1%, according to National Accounts Statistics, 2017. Output values are declining because the cost of what the farmers put in seeds, fertilisers, water is rising faster than the prices they get by selling (Verma, 2017). While the vision of doubling farmers’ income takes farmers as one homogenous set, the small holder farmers – with land less than two hectares – around 85% of the total farmers are the most vulnerable population amongst farmers.

There is a gap between what the Government aspires to achieve and what is actually being translated in impact on the ground. An important question to ask in this context is – whether we see farmers as entrepreneurs, and agriculture as business and how can we increase the performance of this business.

Farming is a business; but all rules of this business are not like other businesses

Agriculture cannot merely focus on cost minimization and profit maximization for the produce.

Use of fertilisers, seeds or other agri-models (mono-cropping) may increase the land productivity and therefore maximize profit margins. But if these choices worsen water balance in the region or degrade soil health or deprive soil of a particular nutrient – it will worsen the food security of the people today and in the future. Therefore, only increasing productivity and profit in short run does not work in agriculture sector.

Unlike a usual businessperson, farmers buy in retail and sell in wholesale markets.

Farmers are the only business persons who are buying inputs like seeds and fertilisers at MRP from retail outlets but selling their produce in somewhat prefect markets – many buyers, many sellers. In a usual mandi, buyers are still unionized and transport and information gaps enable the buyers to decide the selling price of the produce, limiting the choice of sellers (farmers).

60% of the land is rain-fed agriculture in India – with constraints on natural resource availability – suitable water, land and soil conditions. The production risk is further aggravated with the changing climate resulting in crop failures or reduced crop production. Eleven States declared drought between August 2015 and April 2016 (Sen&Bera, 2016). Regional water availability for food production is expected to further reduce due to impacts of climate change like rising temperatures, changing precipitation patterns and increasing frequency of extreme weather events (Ranuzzi, 2012).  Farmers act more as mere managers of the produce; the production is heavily dependent on external factors not under his control – environment.

Farmers Producers Companies (FPCs) is an innovation that can put the above three typical cases in favor of the farmers and make a good business case for practicing economically remunerative, and ecologically sustainable small-scale agriculture. The Government of India had a target of setting up 2000 FPCs, covering 2.5 Lakh farmers by 2015. There are already more than 3000 FPCs that have been registered. However, a recent study by the Institute of Livelihood Research and Training found that many of these FPCs are missing both competent, business-minded leadership and transparency (Mokkapati, 2017).

Some of the common concerns in the structure and business strategy of the FPCs formed today, apart from management competence mentioned by the study are: 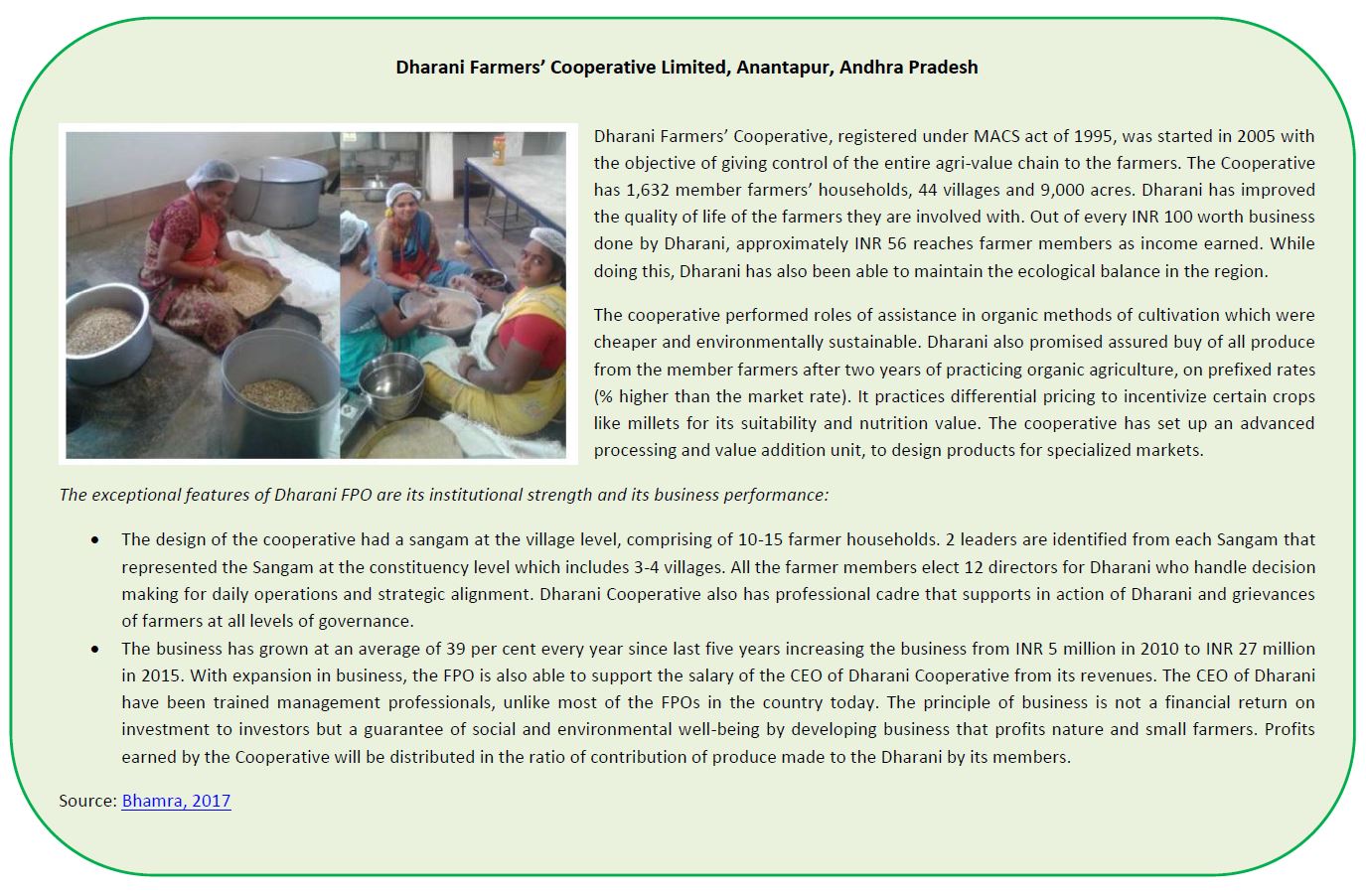 The Government of India needs to focus on how the strengthen FPCs such that they perform the objective of enhancing income of small farmers through sustainable agriculture; strong marketing and value addition channel. This demands serious interventions to address the management constraints, financial credit constraints and market creation that FPCs would require support in. Isolated schemes for agriculture production and market connection will never allow small farmers to mature in utilizing the business opportunity and continue to depend on loan waivers.

Bhamra, A. (2015, December). What can Indian Agriculture Systems learn from other countries? Development Alternatives Newsletter.

Ravi, A. (2017, June). Is Indian farmer being pushed out of agriculture sector? One India.