The Heads of States of both India and France together launched an International Solar Alliance to boost solar energy in developing countries. The launch happened on November 30th 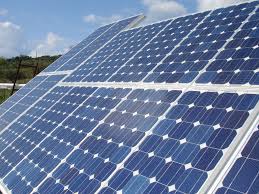 2015, the first day of COP-21, Paris. The city hosted a 2-week long Climate Change Conference of the Parties (COP) that the whole world eyed, hoping to see a universal, differentiated, binding agreement come to fruition. The stage could not be better for the launch of this alliance. With French President Francois Hollande and Indian Prime Minister Narendra Modi launching the International Solar Alliance together, and the UN Secretary General Ban-Ki Moon lending support, it is evident that this is a move well appreciated by the international community. The fact that the Indian Government has spearheaded this idea and has offered an initial investment of $30 million in setting up the secretariat/headquarters in Gurgaon for operations, also tells the international community that India is doing things to achieve the renewable energy targets set forth in its INDCs.

The alliance being set up includes countries lying between the Tropics of Cancer and Capricorn. These are countries that represent a large share of the global population that is unelectrified  or 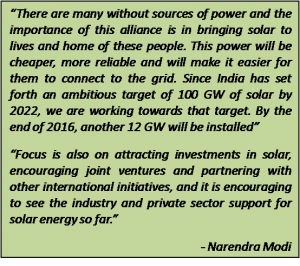 lacks access to affordable reliable energy. The alliance includes over 150 countries that support the declaration on the occasion to launch the international solar alliance of countries dedicated to the promotion of solar energy. While most of the signatory nations hail from the tropics, several European countries are also on board with the initiative, including France and The Netherlands. The Netherlands in fact has made financial commitments.

Recognising that solar has now become competitive with conventional fuels in quite a few areas of the world and in some states in India as well, the International Solar Alliance aims at fostering the best investment conditions for energy companies and financial institutions in all its member states and calls for 1 terawatt (1,000 Gigawatts) of additional solar power capacity by 2030, which will represent an additional 1 trillion dollars of investment in solar power infrastructures. 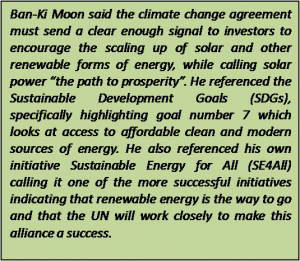 transfer, capacity building; and partnerships of governmental bodies, private partners, manufacturers, researchers, distributers etc. The aim of the alliance is to mobilise finances, build collaborations on research and innovations, share knowledge, exchange best practices, cooperate on training and building institutions and discuss regulatory issues. The eventual goal is to mobilise $400 million from membership fees and international agencies, to lower costs and ensure financing to achieve the ultimate objective of universal access to energy.

Companies involved as partners include Areva, Engie, Enel, HSBC France and TATA Steel. Gerard Mestralled, Chairman and CEO of Engie present at the launch said “solar plays a key role in energy development and the private sector whole heartedly supports the creation of the alliance. Enterprises and the private sector is looking to revolutionalise the electricity sector in the world. The energy sector is excited as solar is perfectly competitive without subsidies.” Engie is the 3rd largest energy producer in the world and number 1 in French solar.

As French President Hollande said in his opening remarks, there is a paradox that the countries with a large solar potential represent a very small share of solar production. It is a great initiative to change this unacceptable paradox into an opportunity for growth.

While the private sector is being looked at considerably for increasing investment into the renewable energy sector, it is still unclear how exactly the INDC targets and the Solar Alliance objectives will be met. On the financing front, there are several models and sources of financing both from initial debt and equity funding from public sector to be followed by companies and private banks. On the technology partnerships, a few MoUs have been signed on sharing of knowledge. The others are yet to be laid out but from conversations around the COP-21 events and discussions, there definitely seems to be investor confidence in India’s potential to grow and more importantly, in the market opportunity that India is providing to the world to invest in and help transform its energy sector.