Urbanisation is one of the defining features of the future. Over 50 percent of the global population resides in urban areas today, a share predicted to increase to 67 percent by 2050. The lion’s share of this growth is expected to be concentrated in developing countries, particularly in Asia. Amongst these countries, India, China, Pakistan and Bangladesh will witness a sharp increase in their urban population, owing largely to population explosion and rural to urban migration. These rapidly developing economies are also likely to experience a rise in the number of existing megacities. Their number is projected to increase from 16 to 21 by 2030.1

With cities being engines of growth, urbanisation will be critical in defining the social, economic and environmental transformations in the future. Therefore, sustainability will have to be at the core of urbanisation. By sustainable urbanisation, cities can create jobs; increase economic growth; improve social inclusion; promote efficient resource use; protect the ecosystems; reduce poverty and pollution.2

India – a country in the midst of rapid transformation from a predominantly rural to an urban society is currently facing challenges of unsustainable urbanisation. The country’s urban population is expected to increase to about 600 million by 20303. Consequently, with current scales of urbanisation, India is struggling to provide access to basic services. The situation is likely to worsen by 2030:

Another area of concern is the increasing slum population in cities. Currently, 65 million people live in slums in India5. An unplanned expansion of urban areas will further compound these issues.

Resource consumption pattern of the cities is also a critical issue. Cities are major consumers of resources and energy and also significant generators of greenhouse gases and waste.6 Therefore, it is imperative to find ways to reconcile economic growth and sustainable resource management in urban areas. 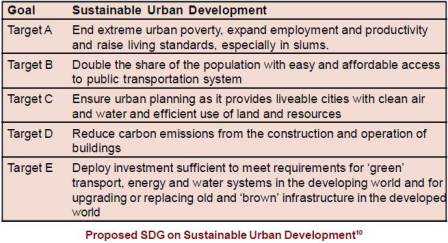 With a target of 2015, the eight goals of Millennium Development Goals (MDGs) range from eradicating extreme poverty to ensuring environmental sustainability. However, these goals failed to account for the impacts of unplanned urbanisation7. Issues concerning urbanisation such as resource consumption, waste management, emission of greenhouse gases and deteriorating air quality are not integrated in the goals.

With the MDGs expiring in 2015, the attention of the world has been focussed on formulating the Sustainable Development Goals. However, for the SDGs to be globally relevant, it is essential to address the needs and interests of city dwellers. With the majority of urban areas still to be built, SDGs would have immense potential to influence the urbanisation agenda in the coming years.8 Development Alternatives is working with the UNEP-International Resource Panel on developing a reflection on the establishment of SDGs aimed at mainstreaming resource management concerns in human well-being.9 The report proposes a separate SDG on sustainable urban development. Even the Open Working Group on SDGs has recognised the need for a stand-alone goal. However, indicators for the targets should be carefully designed in order to accommodate different development stages in all parts of the world.

An urban SDG will provide a nudge in the direction of making cities more sustainable. It would not only help in addressing the urban issues, but would also drive progress on other goals including poverty eradication and achieving inclusive economic growth.